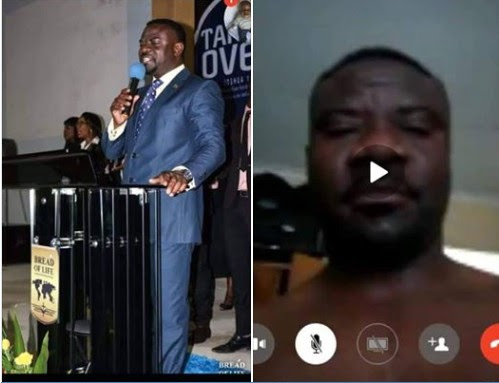 Recently, a pastor made headlines after he was caught sending nude pictures and videos to a married female church member. The pastor, Charles Kalombo, was caught after the said woman’s husband found the footages in her phone and distributed them online in a bid to shame the man.
According to reports, the pastor and elder in the Bread of Life Church, Chingola branch in Zambia, has apologised to church overseer, Bishop Joe Imakando, and the nation over the embarrassing act. Elder Charles Kalombo said he was an embarrassment to his church, and the nation.

“I am very sorry for sending those nude pics to a married woman it was just a mistake” he said. ” The Bible says knock and the door shall be opened, seek and you be given and today I stand before you seeking for your forgiveness. I know I am a disgrace to Bishop Joe Imakando but please forgive me.” said Elder Charles.
He said that it was not intentional to send them to the woman and it was the work of the devil that made him to do that. He said that they went to her by mistake. He also asked the husband of the lady to forgive his wife and not to divorce her.
“She doesn’t know anything and it was not her fault but my mistake as I wanted to send them to my wife but mistakenly went to your wife”, he apologised.
Meanwhile, it has been claimed that the police has arrested the pastor over the viral videos. According to reports, Police Chief Charity Katanga said she will not tolerate nudity and nonsense in her province.
Posted by newsuntold at 7:40 AM

Email ThisBlogThis!Share to TwitterShare to FacebookShare to Pinterest
Labels: viral