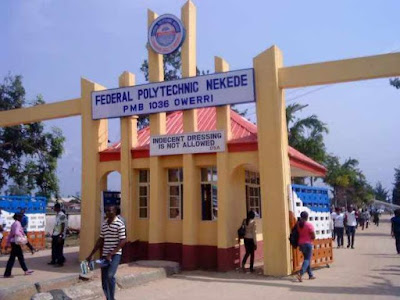 
The Executive Secretary of the Board, Dr Masa’udu Kazaure made this known in Kaduna on Thursday, at the end of the Second Regular Meeting of the NBTE Governing Board. The meeting was chaired by Prof. Modupe Adelabu.
Kazaure explained that Nekede emerged the best after scoring 85.08 percent in the assessment of 112 federal, state and private polytechnics in the country, in the pilot ranking of Nigerian polytechnics.
Institute of Management and Technology (IMT), Enugu, Enugu State is seventh, with 62.31 percent. Federal Polytechnic Offa, Kwara, Rufus Giwa Polytechnic, Ondo State and Yaba College of Technology, Yaba, Lagos State were ranked eighth with 60.77 percent.
Posted by newsuntold at 7:23 AM

Email ThisBlogThis!Share to TwitterShare to FacebookShare to Pinterest
Labels: Education